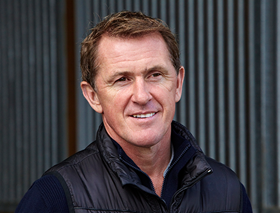 As the 2022 Grand National draws close, former 20-times Champion Jockey, Sir AP McCoy, tells us how the toss of a coin was how he chose to ride 2010 Grand National winner Don’t Push It.

The JP McManus-owned runner gave National Hunt racing’s most successful jockey his first victory in the world’s most famous horse race at the 15th attempt and, as McCoy recaps, it wasn’t a straightforward decision to ride him.

"I’d ridden four or five Grand National favourites before I won, so I had a good experience of failure," McCoy told William Hill. "Funnily enough, the year I actually won it in 2010, I remember staying in the Hilton in Liverpool, and my agent [Dave Roberts] rang me to ask me which horse I was going to ride.

"At the time I was riding mainly for JP McManus, who had four horses running in the race. One of them was called Arbor Supreme, who was ante-post favourite for quite a while. He was trained by Willie Mullins and I had ridden him once or twice and I thought there is no way in the world that Arbor Supreme is going to get around in the Grand National, never mind winning it, so he just wasn’t an option for me.

"Another horse called King Johns Castle, who had been second in the race, but it had been off for a year and a half, which would be like coming back having not played in a game of football and they expect you to play in the Champions League final – it isn’t going to happen, you’re not going to win.

"Then he had two other horses, one called Can’t Buy Time, who was okay and then there was Don’t Push It. I remember ringing Jonjo O’Neill, who was training both horses that morning, and asking him which one I should ride in the Grand National, and he said he didn’t know. So, I asked him to toss a coin. My head was that melted. So, he tossed the coin and it was Don’t Push It."

McCoy added: "This horse had a lot of talent but also a few issues, mentally as well as physically. I proceeded to ride him at the Grand National, but two weeks before he actually pulled up in a race at Cheltenham. So, two weeks before, he was probably 50/1, if not definitely 33/1, so I had no interest in riding him. Anyway, my name went down beside him, and I thought no more of it. I was riding at Aintree on the Thursday and the Friday, and then on Saturday morning ahead of riding Don’t Push It, I was thinking, ‘yes, he had a bit of talent, he had won a race at Aintree the year before, but hadn’t won since’, so I didn’t realistically think he was going to win the Grand National."

Racing’s winning-most jockey then went on to discuss how, despite his failure to win the race previously, he still wasn’t superstitious ahead of his ride in 2010.

"I used to see lads putting on their new gear, and they would throw them on the ground or ask the valets to stand on them," he said. “I would look at them and think, ‘do you honestly think that is going to keep you from getting them dirty?!’ I was never a superstitious person.

"I always used to look at the betting to see if there was a horse that was suddenly fancied that I didn’t know about and should be keeping an eye on. The next thing, I looked up and a friend of mine, who was riding in the race as well, said to me ‘oh my god do you see the price of Don’t Push It? He’s the 10/1 favourite. How on earth are you going to explain getting beaten on another favourite in the Grand National? This will be the fifth or sixth time!’

"Anyway, Don’t Push It managed to win. I don’t look at the Grand National as one of my greatest ever achievements. Sir Gordon Richards had the most wins as a jockey of all time on the Flat, and I broke his record in 2002 for most winners in a season. That to me will always be my greatest achievement, but still, certainly I got a lot of fulfilment and a lot of satisfaction from winning the Grand National."