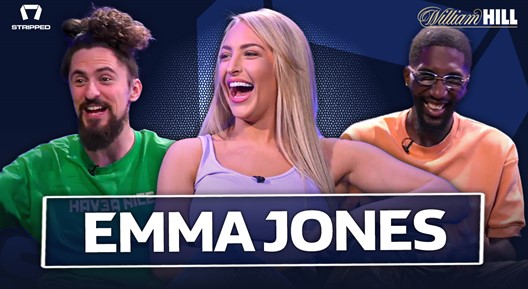 "Bielsa sacking was like losing a family member! He brought so much joy when people were struggling."

TV presenter and Leeds United fan Emma Jones has told William Hill how Marcelo Bielsa’s sacking as Leeds manager was ‘like a family member had died’.

Speaking to William Hill’s Stripped Podcast, a new series in which ex-footballers and celebrities are invited to take a trip down memory lane by revisiting their favourite shirts, Jones said:

"I’ll never forget that feeling he gave us – he brought so much joy to the Leeds fans. To have filled an entire fan base with so much joy and elation at a time when we were so deprived of it – if I could bottle that feeling you’d sell it for millions!"

"You’d see him around different areas in Leeds like in Morrison’s in his Leeds trackies just doing his thing! He was this mysterious character, but I loved it."

Bielsa was sacked in February after a 4-0 home loss to Tottenham, which left the Whites two points above the relegation zone. The Argentine had previously led the west Yorkshire side to their first Premier League campaign in 16 years – impressively finishing ninth on their return.

"I was there with the arrival of Bielsa and there was a definite shift in feeling when he arrived, and I can’t ever explain it but something changed. The standards of everything seemed to go up, even at the training ground. The attitude was ‘everything needs to be at a certain standard’."

"The season when we did get promoted, I think it meant so much because it had been so long. There are Leeds fans out there who have never seen them in the Premier League – that’s crazy! Ultimately, that pain and suffering, it was worth it because we got back there."

"There’s something about Leeds – it’s like they belong in the Premier League. You have to earn that right and I think they have, but they always seemed bigger than the Championship. They always knew where they belonged – even when they got relegated to League One, [the fans] wouldn’t have ever lost hope of getting back up there. That story in itself could be a movie!"

"He’s very outspoken, vocal, overtly passionate and Leeds fans love that,” she said. “It’s a difficult role to fill but fair play to him for filling those boots and implementing his style of play, bringing in his players and hopefully making a success out of it."

Jones was additionally attentive to the ‘American Revolution’ that appears to be invigorating Elland Road, with US midfielders Brenden Aaronson and Tyler Adams joining their manager.

She said: "I was chatting to Tyler [Adams] and Brenden Aaronson just a few weeks ago. All of a sudden, all these Americans have come in – the manager, Brenden, Tyler – and they are great guys."

"Obviously the fans love them anyway for what they’re doing on the pitch but their character and the way they bounce off each other – they’ve got great energy and they are so passionate; you can tell they are buzzing to play for Leeds United in the Premier League.

"Elland Road has the kind of atmosphere where you have to feel it to believe it – it’s unbelievable. I’ve spoken to loads of players about that and they speak about what that does for them. You talk to the American lads like Tyler and Brenden and they all say I was told [about the atmosphere] but you can’t prepare yourself for it. There is no feeling like it. That place lives and breathes passion."

You can watch the full episode here: https://youtu.be/wJ87-NQg85I