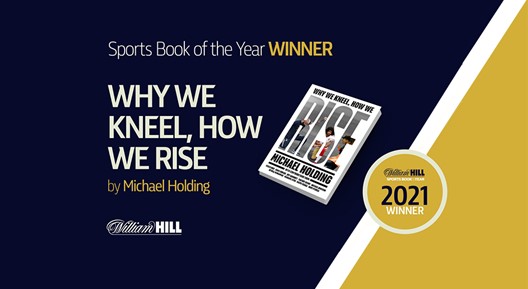 Why We Kneel, How We Rise by Michael Holding (Simon & Schuster Ltd) has been announced as winner of 2021 William Hill Sports Book of the Year Award.

Holding’s book described by the judging panel as ‘one of the most important sports books you will ever read’ – looks into the root cause of racism and the terrible toll it takes on people, communities and the world.

Last year, Holding stopped the sporting world in its tracks with his eloquent and passionate conversation with Ebony Rainford-Brent on Sky Sports TV about his experience of racism and his views on the ‘Black Lives Matters’ movement. And it was the public reaction to his powerful words about racism that compelled him to write this important sports and societal book.

The legendary cricketer’s book, written with the help of journalist Ed Hawkins, explores how racism dehumanises people, how racism has been ignored by history and historians, and what it is like to be treated differently just because of the colour of your skin.

Holding also invites some of this generations biggest sporting icons, including Usain Bolt, Thierry Henry, Michael Johnson and Naomi Osaka to share their stories and views on one of the biggest ills in society.

Through all the pain outlined in the book, Holding delivers a message of hope and a clear pathway for change in our world.

Michael Holding, said "I felt it was really important to write this book, and I hope it encourages people to educate themselves about the issues raised. I would like to thank my writing partner, Ed Hawkins, Simon & Schuster and all the great sports stars who contributed to the book."

I am proud and honoured to receive the iconic William Hill Sport Book of the Year award, and I hope this will help us spread the message of ‘say no to racism’ and importance of learning more about this important topic."

Alyson Rudd, Chair of Judges, said: "Given everything that has happened in the world over the last 18 months, I am proud the standard of the entries was as strong as ever. Michael’s book was very well written, and brilliantly and evocatively highlights the importance of education in defeating one of society’s biggest issues."

Holding beat five other shortlisted authors for the 33rd annual William Hill Sports Book of the Year, the world’s oldest and richest sports literary prize and not a single finalist on the list had won the award before.

The other shortlisted books were:

Following Grigory Rodchenkov’s win in 2020, organisers were glad to have the event back in person and be joined by many of the authors at BAFTA in London’s Piccadilly.

This is the sixth time a cricket-related book has won the award. Football-themed books have been the most frequent winners - seven of them.

The official awards ceremony was held at the newly refurbished BAFTA on Thursday evening. Michael Holding took home the £30,000 cash prize and trophy, while shortlisted authors all received £3,000 and a leather-bound copy of their book.