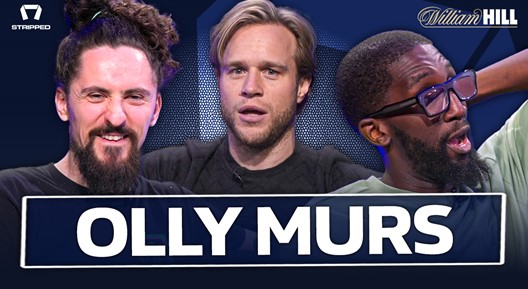 Platinum selling singer-songwriter Olly Murs has told William Hill how starstruck he was when meeting his hero, Eric Cantona, and how a dressing-room encounter with the treble-winning Manchester United team, was one of the best moments of his life.

Speaking to William Hill’s Stripped Podcast, a series in which ex-footballers and celebrities are invited to take a trip down memory lane by revisiting their favourite shirts, Murs said: “I’m at Soccer Aid, and Eric Cantona is playing. I’ve just been named captain, I can’t believe I’m going to be captain at Old Trafford in front of Cantona, and he is going to play, and Pele is there...”

“At the team hotel, I need to get a photo with Eric, and I go looking for him. I’m wearing this Puma top that has a collar, and I got the photo with him, and he had his collar up, but I’d left mine down. When people ask me what my biggest life regret is, it is not putting my collar up in a photo with Eric Cantona! I posted the photo on social media, and I had loads of Man United fans grilling me, asking why I hadn’t put it up.”

“I’ve met some amazing singers in my lifetime; I’ve sung in front of Whitney Houston at the Dorchester in London, on The X Factor, I’ve been on stage with Robbie Williams, I’ve even performed with Sir Paul McCartney. I’ve met some huge stars. But when I met Eric Cantona, I’m telling you, it was a bigger moment for me than any of the others. I was so nervous and starstruck when I met him. I was all over the place. I didn’t know what to say to him. I couldn’t get into gear; it was like I was in clutch, churning over and over. I got the picture and left, and it ended up being my biggest life regret.”

As a huge Manchester United fan, things got better for Murs when he was invited to play at Sport Relief with some of the players from the treble-winning 1998/99 team.

He said: “I did a charity match after doing The X Factor for Sport Relief, and I was in the dressing room with the 1999 Man United team. I had Ole Gunnar Solskjaer, Andy Cole, Dwight Yorke, Teddy Sheringham in there with me, it was unreal.”

“Keano (Roy Keane), Paul Scholes and Gary Neville weren’t there but a lot of the others were, and I’ll never forget Sir Bobby Charlton coming in at half-time, stripping down and going for a shower. He was just like ‘alright boys, just going for a shower.’ It was unbelievable! He got stark naked, and I couldn’t stop looking. He was a proper lad, but for some reason, I felt really surprised. It was Sir Bobby Charlton, and it was mind-blowing.”

“Even now, I remember it like it was yesterday, just sat there feeling like this is a normal football team with all the lads, all the boys. I ended up getting in the shower with all of them, Teddy, Dwight Yorke, Andy Cole, Ole and Bobby. I just wanted to get in there with them. It was amazing. People might think it’s an odd thing to say, but it was just unbelievable.”

“I told myself I was never going to get that moment ever again; I need to enjoy it. And I did. It was unreal, I was in there for two hours with them and I loved every minute of it. I went straight home and told all my mates. If my career had ended the day after, it would have been OK. Life was complete.”

“I’ll never forget those moments; just coming off The X Factor and playing at Old Trafford with the 1999 team in front of 75,000 people. Incredible times.”

Elaborating on his memories of playing at Soccer Aid, Murs touched on a memorable moment he shared with Jose Mourinho, which saw him taken out by a challenge from the manager.

He said: “Jose Mourinho is a brilliant guy by the way. I still back him to this day. Everything he said about that Man United team has come true. He is honestly a genius and such a lovely guy, and it was funny because during the Soccer Aid week he was honestly banter and a great guy to have around.”

“At that time, to big myself up a bit, I was probably one of the best players in the team and he was just having a moment. I’ll never forget it. I came off and it was worldwide news. CNN were like ‘Olly Murs got hit last night by Jose Mourinho pitchside.’ It was a great moment, we laughed about it afterwards.”

You can watch the full episode here: https://youtu.be/04D3KSHP4xA