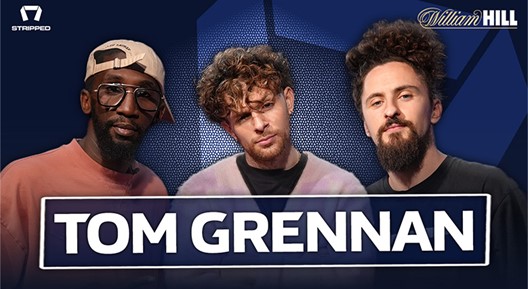 Tom Grennan recalls growing up as a Man United fan and dreaming of a football career.

Speaking to William Hill’s Stripped Podcast, a new series in which ex-footballers and celebrities are invited to take a trip down memory lane by revisiting their favourite shirts, Grennan explained the incident.

"My mate Pete, he is Beckham’s good mate but is also David and Victoria’s personal trainer," he said. "He was like, do you want to come and do some boxing with Becks and me? I was like, uh yeah, definitely.

"I was well unfit at the time though, so I was having to put my brave face on, boxing away. I could feel myself about to be sick. I couldn’t be sick in front of Beckham, so I ran out of the room and was sick in the bathroom! I then walked back into the room and he shook his head in disappointment. Becks thought I was a wuss!"

Grennan grew up in Bedford and found his love of football and his team Manchester United at an early age.

"I was about five or six in 2001,” Grennan, who chose United’s 2000/01 home kit, said. "It was around this time I have my first memory of football and falling in love with a team and a player. Paul Scholes was my guy, but I fell in love with Keano [Roy Keane]. The way he played, his attitude on the football pitch; he’d skin everybody and just hammer people. That top is an icon of Keano, his skinhead. Obviously, it was a good time for United back then too."

Grennan added: “The reason I am a Manchester United fan is because I have a big Irish family, and all my cousins over there are massive football fans. I really do think, being from Ireland you are either Liverpool or United, and my cousins were United,” the 27-year-old singer said. “There is a picture of me, five days after being born and I am in a United baby grow. It’s always been in me to be a United fan. I’ve always been connected to the badge.”

The success of his music career has given Grennan the chance to meet his footballing heroes and even play alongside them when taking part in Soccer Aid 2022.

He said: "For Soccer Aid, I sat next to Teddy [Sheringham] on the coach on the way to the stadium. I say Teddy like he’s my mate… We spoke for the whole journey. He told me loads of stories. He’s done it all that guy. There is a great one of him at the Nou Camp. He actually called his house the Nou Camp.

"Playing with those legends on the pitch, I remember the ball getting kicked to me, I look up and see [Wayne] Rooney coming at me. I passed the ball past him, dropped a shoulder, and got round him. I remember Jamie Carragher taking the ball off him and slicing a ball 30 yards to Patrice Evra. I just thought these are my heroes, seeing Paul Scholes just whipping it about. It was surreal, it still gives me butterflies talking about it.”

However, one of his heroes certainly left an impression on him on the pitch, as Grennan took a heavy tackle that left him injured.

"I love Patrice Evra. He did injure me though!" he said. "He went through me, couldn’t handle the pace! I tore the ligaments in my foot. I did get a nice message from him though. A week after it happened, I still hadn’t heard from him and was thinking he has definitely been told I am not in a good way. Two weeks later I get a message in my inbox from him, what a legend."

As a teenager, Grennan had hopes of a football career of his own and was on the books of Luton Town, but his memories of their shirt from the early-2000s are tinged with different feelings.

"It’s a part of my past this shirt, I’d still wear it," he said. "I wouldn’t say it’s haunted but there’s this thing about Luton and how I used to play for them. That was the dream, to play football. I hit 17 and there is a decision on whether or not you make it to the next step, and I wasn’t good enough. I had a few trials at Northampton and Stevenage, and I wasn’t good enough to play. I feel like back then when that happened, the dream fizzled out. I didn’t hate the game, but I wasn’t bothered about it. I quit football and thankfully the music happened."

Grennan’s influences when he was younger mainly came from the pitch rather than the stage, and he said: "All these people, they are my superheroes. When I get asked about who influenced me in music, I say no one really. When I was a kid, I wasn’t really looking up to musicians. Footballers were my superheroes."

Reflecting on his mistakes in football that have helped to fuel his music career and set him on the path to success, Grennan added: "My attitude definitely wasn’t right, but what I learnt from football and why I think I’ve found success in music, is to take advice. I haven’t made the mistakes in music that I did in football. I’ve absorbed information, I’ve listened to my manager. With music, like football, it’s a team effort. So much goes on behind the scenes with the label and the people who work there, everyone is coming together to make the project work."