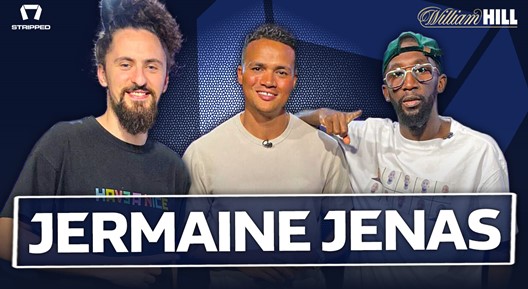 "I was living the dream and then suddenly everything changed".

Former Tottenham, Newcastle and Nottingham Forest Midfielder Jermaine Jenas told William Hill how a cheeky on-field moment from Rafael van der Vaart, led to a fight with Spurs teammate Benoit Assou-Ekotto in the showers. Speaking to William Hill’s Stripped Podcast, a new series in which ex-footballers and celebrities are invited to take a trip down memory lane by revisiting their favourite shirts, Jenas said:

"We get in, everyone is getting changed and then suddenly I hear this commotion in the showers. It’s Rafa and Benoit going at it, naked! It got stopped pretty much immediately but it just shows that these things happen a lot, just not on the pitch."

Jenas was no stranger to abnormal moments during his career, as he was also on the pitch when his Newcastle teammates Kieron Dyer and Lee Bowyer famously scrapped in 2005. He said:

"I’d never experienced anything like that. The maddest thing about the whole thing was that every single morning we’d have round tables in our canteen, and you’d have breakfast and lunch together. Bobby [Robson] was very serious about the players eating together and we couldn’t leave without his say-so. On my table every day was me, Kieron [Dyer], Jonathan Woodgate, Lee Bowyer, and Bellers [Craig Bellamy]. We’d sit there and eat and chat every single day and got on really well."

"It was just a moment of madness to be honest, but our dressing room was fiery like that. At half-time, if things weren’t going well, there wasn’t like ‘let’s see what the manager has to say’, instead you’d have a player in your face telling you to sort yourself out."

"For Kieron it was a real shame because it’s what he’s known for. Honestly, when he was on, he was one of the best players I ever played with."

The 39-year-old began his career at Nottingham Forest before moving to Newcastle for £5 million, the third biggest fee for a teenager at the time. After selecting Forest’s 1994/96 home shirt, he recapped on his time there:

"Growing up as a Nottingham Forest youth player, it is drilled into you that this is a club that has won things. The history is everywhere. The two European Cups they won are front and centre when you walk into the club as a kid. All of the players are still there, and they tell you the stories of this sort of way playing football at the club. There’s a certain type of education that you’re getting that is above and beyond any education that you get at any other club."

"It was a shame it went the way that it did. I loved it to bits and never wanted to leave. The dream for me would have been to have done what [Steven] Gerrard did at Liverpool. If Forest had had the money to be competitive and invest and keep me as a Premier League player for Nottingham Forest, it would have been the dream."

"I was 17 years old, captain of the football club and I’d just bought this flat on the River Trent. I used to wake up on a Saturday morning and I could see people walking to the stadium. I was living the dream and then suddenly everything changed. There were obviously big financial problems and as I was the club’s most valuable asset, I had to go."

A holder of 21 international caps, Jenas was part of a golden generation of England players under Sven Goran Eriksson, and while he was grateful to have been part of the set-up, it was an era tinged with frustration. He said:

"I look at that era under Sven and you can sit there and be bitter about it, but we had some seriously good players around that time. Sven’s [Goran Eriksson] biggest failure in my opinion was his inability to adapt to what we had. We were so obsessed with not having a left winger at that particular time when it didn’t matter. For players like myself, Michael Carrick and Owen Hargreaves, we just sat there frustrated to an extent because we were involved in a team that should have done so much better than it did."

"We never really had any guidance. He was a great guy, Sven, but I just didn’t see what he was trying to do. I can’t remember one game when we played a team off the pitch. It was only Michael Owen was a genius, David Beckham was a genius, [Steven] Gerrard, [Frank] Lampard, [Paul] Scholes and it was up to them to dig us out of a hole. I honestly can’t remember one game when we were brilliant."