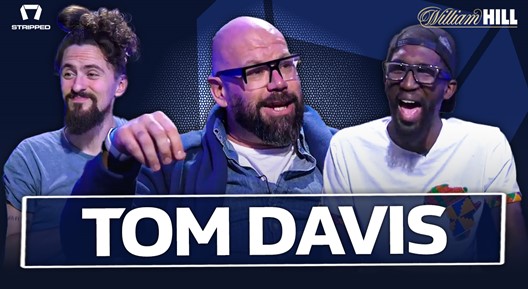 British actor and comedian Tom Davis has told William Hill’s Stripped Podcast about how a conversation with Rio Ferdinand provided the inspiration for him to succeed in television.

Speaking on the Stripped podcast, a series in which ex-footballers and celebrities are invited to take a trip down memory lane by revisiting their favourite shirts, Davis, who won a BAFTA in 2018 for his show Murder in Successville, said: “One of the biggest moments of my life was when I won a BAFTA. It was an incredible thing, to have gone from where I started to win that. Rio [Ferdinand] also won that year.”

“Afterwards, I was walking around – I’m not someone who feels like I need to shake everyone’s hand, I’m not a great networker – but then I see Rio’s there and he comes over and says congratulations.”

“From there, I was like ‘I can push on.’ From talking to Rio, I’ve learnt that you might not always win the prize, but you can get up in the morning and push yourself to the best version of yourself. I found that a real big inspiration. What we need, as a former working-class kid, are people who are inspiring.”

Davis also recalled how leaving school early meant the mechanisms of football served as his primary form of education, explaining how his childhood was far from straightforward.

“I got kicked out of school when I was 10. I think football affects the identity of who you’re going to be, it’s such a big part of when you’re growing up, especially if you grow up in a working-class background.”

“I’m not an educated guy, I didn’t go to school – schooling has been football. As someone who watches football and see how it works and how different people fit in, everything is a football analogy. For example, in a relationship, be a Gary Neville – always turn up to training, always try your hardest.”

“In the context of my life, I’m like Jamie Vardy – played for a lot of lesser clubs, couldn’t quite find my way, but then found happiness in a place.”

“I went for a job as a bin man when I was 16, I thought all I ever wanted to be was a bin man, but I went along and they said I was ‘too eager.’ I’d look out the window and see the team spirit they had, always having a laugh together. When I was working on a building site too, you get different people from different cultures and backgrounds who are doing different jobs there.”

“In 1996/97 when London was a very growing place, you’d meet people from Serbia and Romania, and the one language you’d all have – was football! You work with a Romanian geezer, the first thing you say is ‘Popescu’ or ‘Petrescu!’”

Davis then recounted the early stages of his comedic career, which did not start until the age of 31, and described the battles he had towards the end of his youth.

“When I became a comedian, I just wanted to do something else in my life. Now we have conversations as men about mental health and we talk about it a lot – but then we didn’t, you just tried to suck up your problems, you try to not be a hindrance for people. I was probably in a position where I was quite depressed and quite down at the lack of achievement and feeling I hadn’t accomplished anything in my life.”

“When I was 31, I was still doing the same job I was doing when I was 15. I’d seen a few comedians do stand-up – like Micky Flanagan – and I was just in awe, I thought ‘I’ll try this thing’ and I worked really hard at it.”

“I worked on the site in the day then in the evening I’d go to gigs. Sometimes I’d have to travel five or six hours on a coach to do five minutes on stage then get back to London at five in the morning that night. I had to be like Ian Wright or Jamie Vardy – I played in the non-leagues and work my way up.”

You can watch the full episode here: https://www.youtube.com/watch?v=JqTOpSIbDAM