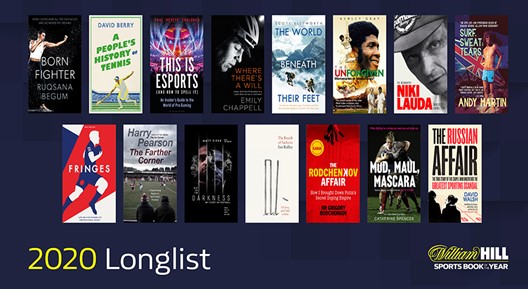 29th September 2020, London, UK:  Today marks the release of the longlist for the 32nd annual William Hill Sports Book of the Year awards - the world’s oldest and richest sports writing prize - with strong female and ethnic diversity among entrants.

This year’s list has been carefully chosen from a record 152 entries and includes a diverse mix of authors from a wide range of sports including; tennis, football, rugby, cricket, cycling, formula one, surfing, Muay Thai, mountaineering and, for the first time in the awards’ history – esports.

Following Duncan Hamilton’s historic triple crown in 2019, organisers are looking forward to naming a new winner this time around - with no previous victors featured on the longlist.

The impressive longlist comprises remarkable tales of courage and defiance, feats of incredible endurance, hard-hitting autobiographies and heartfelt memoirs, as well as revealing accounts of the darker side of sport.

Two of this year’s longlisted authors focus on telling the story of Russia’s state-sponsored doping programme, with startling revelations from whistle-blowers and the mastermind behind the scheme, while another goes deep into the underbelly of surfing with a ‘beyond-belief’ true crime tale.

The Judges were delighted with the number of female authors who entered this year, and they are represented by three strong contenders including world champion Muay Thai fighter Ruqsana Begum, former England rugby captain Catherine Spencer and endurance cyclist Emily Chappell.

The shortlist of six books will be announced on Tuesday, 27th October. The shortlisted authors will each receive £3,000 and a specially bound copy of their book. The 2020 winner will be announced on Thursday, 3rd December at the new home of the WHSBOTY, Tottenham Hotspur Stadium. The winner, decided by the judging panel chaired by Alyson Rudd, will collect a cheque for £30,000 and the prestigious William Hill Sports Book of the Year trophy.

WHSBOTY review panellist and renowned sports broadcaster Matt Williams says, "I'm beyond thrilled to be involved in picking the longlist for an award that I've followed closely for years. I've relished immersing myself in the record number of entries and, although it was tough for the panel to narrow it down, I'm immensely proud of the longlist. There are startling stories, brutal confessions and even the odd laugh. I'm also delighted to see the number of diverse stories in the running for this prestigious award."

Last year’s grand prize winner, Duncan Hamilton, remains the only author to have won the award three times, taking top honours in 2019 for his biography ‘The Great Romantic: Cricket and the Golden Age of Neville Cardus’ – what has since become a Sunday Times Bestseller.

To request interviews with any of the longlisted authors, book review panellist Matt Williams or a member of the judging panel, please contact maryke.penman@macesport.com